The textbook, "Science and Health with Key to the Scriptures" by Mary Baker Eddy, contains one chapter that is often overlooked by students of Christian Science. This chapter of one hundred pages entitled "Fruitage" contains testimonies of healing received through reading Science and Health. In these testimonies are some gems of metaphysical truth. One such has been of great help to the writer. It is to be found on page 683, and reads: "Through reading the textbook I learned that God has given us strength to do all we have to do, and that it is the things we do not have to do (the envying, strife, emulating, vainglorying, and so on) that leave in their wake fatigue and discord." Yes, it is the things one should not be doing that cause one's steps to drag, one's face to image weariness, and one's body to manifest inharmony. Man is God's reflection, and all he has to do, is to image forth his perfect Maker, whom Mrs. Eddy defines as Love, Spirit. Soul, Mind, Principle, Truth, and Life.

Once a student who had in her early experience in Christian Science been freed from rough, chapped hands found them again becoming quite unsightly. Her first thought was, "This is because I have to wash my hands in cold water daily before leaving work." Immediately, however, she knew that water, hot or cold, had no power over God's man, and she began to search her thought. Then she acknowledged that she had been fretting under a certain assigned task. A quotation which appeared on the Daily Features page of The Christian Science Monitor came to mind: "Work is love made visible." With this she corrected her attitude toward the work, and her chapped hands were healed by the correction of her thought. 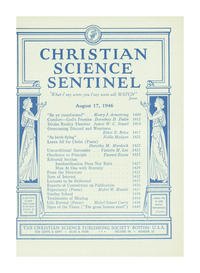