To human thought, the symbol of the circle is expressive of beauty and reality. In nature and in art the curve expresses grace, strength, mobility, and loveliness. The seeming circle of the sky, the spherical heavenly bodies, the curving petals of the rose, repeated in the domes and arches of stately buildings and in the art of painter and sculptor, symbolize the harmony, completeness, and eternality of real being.

In a striking passage in "Science and Health with Key to the Scriptures" (pp. 282, 283) Mary Baker Eddy discusses the circle and the straight line as symbols respectively of Life and of the opposite belief in material existence. One sentence in this passage is as follows: "The circle represents the infinite without beginning or end; the straight line represents the finite, which has both beginning and end." Later on she adds, "As mortals begin to understand Spirit, they give up the belief that there is any true existence apart from God." 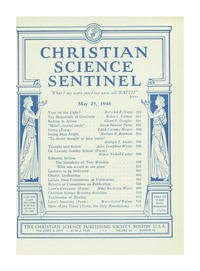