The apparent inconsistency between Christian ideology and the warfare which involves destruction of human lives results in deep questionings in the minds of our fighting men. One may well ask how he can be an agent for destroying life and at the same time profess a religion which teaches that Life is indestructible.

The fact is that Life is indestructible and eternal, for Life is God. There is no death. There is no conceivable weapon or means by which man, God's idea, can be deprived of the Life which is eternally his. To shoot a mortal and then deduce that you have deprived man of infinite Life is as erroneous as contending that you render a mathematical truth extinct by burning a piece of paper on which a misstatement of it is written. God's idea, spiritual man, exists secure in Mind even though what is called death happens to a mortal, as does the mathematical truth exist after the destruction of the paper on which an incorrect statement of it is written. 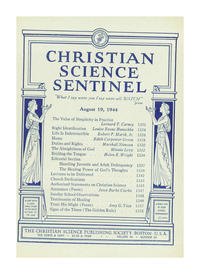