"The life which I now live"

After many years as a seasoned soldier of Christ, Paul wrote triumphantly to the Galatians, "The life which I now live in the flesh I live by the faith of the Son of God." And yet the Apostle, then named Saul, was at first a persecutor of the Christians, and so he continued until the Christ appeared to him on the road to Damascus.

This dauntless apostle was to prove on numerous occasions that no dire material happening or circumstance could quench his faith or dim his understanding of the Christ; but rather that his ever-increasing grasp of the fact that God, divine Truth, was his life was to result unfailingly in the destruction of each aggressive claim that his life could be at the mercy of matter. 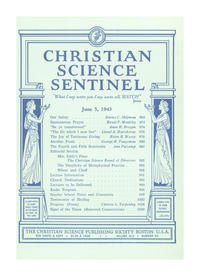