For more than eighteen years I...

For more than eighteen years I have relied upon the teachings of Christian Science in solving human problems, and I have found it a practical way to prove that the promises in the Bible are for all men throughout all time.

I was brought up by Christian parents who were sincere in what they understood of Christianity, but there were some things which I could not reconcile with what I believed about God, whom the Bible describes as Love. At a time when I was going through many confusing situations, with no solution offered except that I must bow to God's will, I found myself rebelling at the thought of serving a God who either could not or would not help me in trouble. It was at this point that I was led to take up the study of Christian Science with the hope of helping a relative who was suffering from an injury which did not yield under medical treatment.

Send a comment to the editors
NEXT IN THIS ISSUE
Testimony of Healing
After having so many proofs... 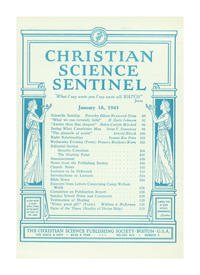