A newly appointed Sunday school teacher, prayerfully considering work before her, thought of her own years in the Christian Science Sunday School, which she had attended from the age of three. She asked herself what in the various classes had been most valuable, and what particular characteristic she had most appreciated in her teachers. She decided that the classes which had meant the most had been those in which there was a readiness to discuss absolute Christian Science. So she determined that in the class then assigned to her she would not be deceived by the fallacy that young pupils need to be talked down to.

Both observation and experience subsequently illustrated that "the deep things of God" are not too deep for a young person's comprehension and utilization, when properly and winningly presented. Furthermore, it was apparent that when a teacher clearly understands the truths he is explaining, the pupils follow him attentively and intelligently; whereas when a teacher has not yet fully made some point his own and attempts to discuss it, the students' attention tends to wander. One object is to encourage the pupils to express their thoughts, but it is the teacher's province to explain and answer questions, on the basis of absolute Christian Science.

Send a comment to the editors
NEXT IN THIS ISSUE
Testimony of Healing
It is now fifteen years since... 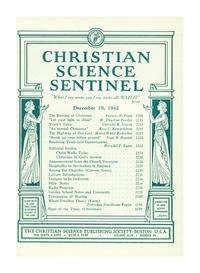