The illumination which came to...

The illumination which came to me in my first reading of the Christian Science textbook, "Science and Health with Keyt to the Scriptures" by Mary Baker Eddy, was so great that it not only healed me of many discordant physical conditions, but irradiated my whole outlook on life. Since then, a period of twenty years, Christian Science has been my only physician and has met my every need.

Previous to this time I had been a semi-invalid for many years, and had never known what it was to enjoy good health. I had undergone several operations, taken every kind of treatment known and available, but like the woman in the Scriptures, I "had suffered many things of many physicians, ... and was nothing bettered, but rather grew worse;" until the misery was so great that I felt it would be a blessing to pass out of this existence. Finally I was told that if I lived a very secluded life and ate only two articles of food, as prescribed, I might live a year. Before the year had passed I became very ill, and my husband informed that the end was near and would be sudden.

Send a comment to the editors
NEXT IN THIS ISSUE
Testimony of Healing
I cannot longer withhold written... 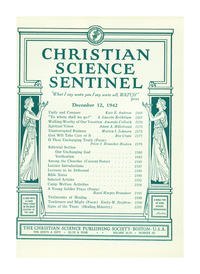