The disinclination to face the claims of evil is common to mankind. It is recorded that when Moses cast down his rod and it became a serpent, he fled before it. But when he was divinely directed to handle the serpent he found the rod restored to him again.

The Christian Scientist learns that he can neither condone nor ignore evil, but must destroy his belief in evil as real. Our beloved Leader, Mary Baker Eddy, states in the textbook, "Science and Health with Key to the Scriptures" (p. 450), "The Christian Scientist has enlisted to lessen evil, disease, and death; and he will overcome them by understanding their nothingness and the allness of God, or good." Thus Christian Science not only reveals the necessity for this warfare, but also teaches the means of defense. 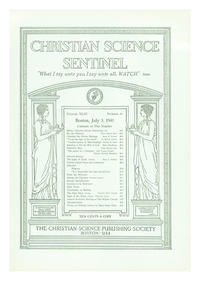