The Angels of His Presence

"The angel of the Lord encampeth round about them that fear him, and delivereth them," sang the Psalmist. Very near to all of us are the goodness, love, and power of God, that invincible presence which is ever available to drive out fear, disease, and despair. The angel that touched Elijah as he lay despairing under the juniper tree in the desert quieted and restored his troubled thought until, rested and refreshed, he was able to reach the heights of Horeb and hear the "still small voice" above the clamor of personal sense.

What an upward influence angels awakened in the experience of Jacob! Mrs. Eddy says in "The First Church of Christ, Scientist, and Miscellany" (pp. 188, 189), "When divine Love gains admittance to a humble heart, that individual ascends the scale of miracles and meets the warmest wish of men and angels." Weary of doing wrong and disciplined by his lonely night at Bethel, Jacob was ready to embrace the comforting assurance that divine Love is ever present to guard and guide. His ascent assuredly began when the angels, whom he beheld in his vision ascending and descending on the ladder let down from heaven, lifted his thoughts Spiritward. At length, struggle and aspiration changed a career that started in greed and duplicity to one that led to such heights of inspiration and purified thinking that he was able to see the face of Esau—his brother whom he had wronged and feared, and from whom he had fled—as though he "had seen the face of God." It is probable that Jacob's glimpse of the real man, the man made in God's image and likeness and wholly spiritual, touched Esau's thought as well, for the brothers were reconciled. 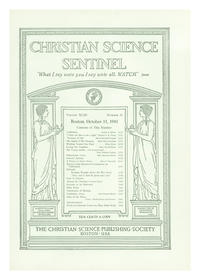