On the first day that a little girl went to school, the ground was covered with newly fallen snow. The children invited her to play a game with them, the objective being to walk in a straight line, leaving a straight track in the snow. After she took her turn, she found she had made a zigzag track. She had tried and failed; so upon her return home she told her father of the game and of her failure. The father said: "I'll give you a rule that will help you tomorrow to walk in a straight line, but you must follow the rule. Decide on a goal. It may be a fence post or flag pole; but when you have decided, keep your eyes lifted to the goal and never lower them to watch your feet." The next day the little girl followed the rule, and when she reached her goal she found she had walked in a straight line and won the game.

Mrs. Eddy has written (Science and Health with Key to the Scriptures, p. 426), "The discoverer of Christian Science finds the path less difficult when she has the high goal always before her thoughts, than when she counts her footsteps in endeavoring to reach it." Mrs. Eddy also speaks of "perfection" as "the goal of existence" (Miscellaneous Writings, p. 85). In order to reach this goal it is necessary to uproot every false belief and to replace it with the understanding of good, and to go forward with expectancy of good, making every day a day of true progress. 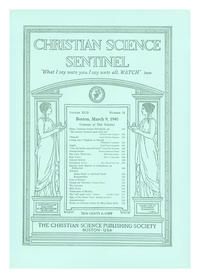