When a very small child, I sent out a prayer for help...

When a very small child, I sent out a prayer for help and received an influx of peace and comfort which I have never forgotten. Later, not knowing how to pray aright, I lost all faith in prayer, and yet I knew that somewhere, somehow, God was revealed to this age. I started searching through every creed and ism, only to meet a blank wall and keen disappointment. I allowed myself to become influenced against Christian Science when quite young, and later I had to be convinced that God is revealed to this age through Christian Science. Only when sentenced to death through total helplessness from a tubercular spine would I listen to the "still small voice."

It was a certain proof to me that we "live, and move, and have our being" in Him, when I was able to go to a practitioner, even though an X ray had shown several vertebrae decayed. Although when I left the practitioner I was seemingly "walking on air," and realized I had found the new heaven and the new earth, I soon doubted, and began to suffer agony, being unable to move in any way, even to lift my hands to my face. While the practitioner was helping to free me through divine Love, my father, a physican, conferred with other doctors, and became very fearful about my condition. I was in this state for five weeks. My first shock came when the practitioner told me that God saw my true selfhood as perfect. One day a spasm stopped instantly when the practitioner was called. I then had my proof. "The stone which the builders rejected," had "become the head of the corner" in my consciousness. After I had taken my stand for Truth, recovery was rapid.

Send a comment to the editors
NEXT IN THIS ISSUE
Testimony of Healing
Among the many blessings Christian Science has brought... 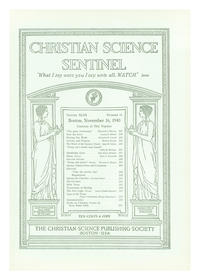