In a recent issue there appears an item in which you make...

William H. Owen, Committee on Publication for the State of Wisconsin,

In a recent issue there appears an item in which you make the following statement: "At first Washington ignored the recession, gave it the Christian Science treatment." Such a statement is misleading; and lest your readers gain a wrong impression of Christian Science and its teachings, I respectfully request space in your paper to make a correction.

The statement referred to would indicate that Christian Science ignores the presence of evil, sin and sickness, which is far from the truth. In the Christian Science textbook, "Science and Health with Key to the Scriptures," Mary Baker Eddy, the Discoverer and Founder of Christian Science, writes (p. 460): "Sickness is neither imaginary nor unreal,—that is, to the frightened, false sense of the patient. Sickness is more than fancy; it is solid conviction. It is therefore to be dealt with through right apprehension of the truth of being."

Send a comment to the editors
NEXT IN THIS ISSUE
Article
A report in a recent issue needs a correction regarding... 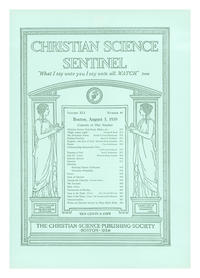