In a recent issue of Gotchnag, a contributor makes...

B. Palmer Lewis, Committee on Publication for the State of New York,—New York (translation)

In a recent issue of Gotchnag, a contributor makes reference to Christian Science and its adherents. He states: "Their philosophy is founded erroneously, for they deny the reality of the presence of sin and pain. Christian Science comes nearer the Emersonian point of view, which always beholds the bright side of life, etc., etc."

If our critic understood the meaning of "reality," as used in Christian Science, he might be more inclined to agree with this religion. Christian Scientists know that all reality is of God. The Bible says, "In the beginning was the Word, and the Word was with God, and the Word was God. ... All things were made by him; and without him was not any thing made that was made." Accepting this as true, the Christian Scientist realizes that all that really is, is good. That which is not good was not made by God, but is the illusion of ignorant belief, which seems real to those who accept the premise of a power apart from God. Sin and pain are not from God. Like produces like. "Do men gather grapes of thorns, or figs of thistles?" Because God is omnipotent good, He could not send sin and pain. Therefore, they are no part of His creation.

Send a comment to the editors
NEXT IN THIS ISSUE
Article
In a recent issue, a clergyman is reported to have said... 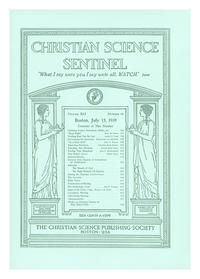