True Warfare, the Way to Peace

Humanity longs for peace and has made many efforts to gain it; yet it still seems far beyond universal attainment. Jesus said, "Peace I leave with you," but it is evident that men have failed to understand Jesus' teachings, for they still go about the business of making war.

Christian Science, which was discovered by Mary Baker Eddy in the latter half of the nineteenth century, brings to mankind a teaching in regard to peace which will eventually end human warfare through a right understanding of the nature of good and evil. It might be said that Christian Science does away with human warfare by inaugurating the true warfare, the warfare of Spirit, in which the understanding of good annihilates all belief in evil. 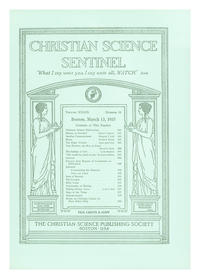