We read in the book of Acts that Herod, in his attempt to stop the progress of the Christian religion, placed Peter in prison. He also ordered such a guard placed about him as would make it seem humanly impossible to escape. And yet we are told that "the angel of the Lord came upon him" while he slept, and he was bidden to "arise up quickly." Then his chains fell off, and he and his angel guide passed through the prison to the iron gate, "which opened to them of his own accord"—and Peter was free.

It is pertinently pointed out earlier in the narrative that, immediately upon Peter's arrest, "prayer was made without ceasing of the church unto God for him." And so it is realized that Peter's release was gained, not only by his own undoubtedly consecrated and confident prayers, but with the supporting prayers and understanding faith of those Christians in Jerusalem who were eager to assist him. 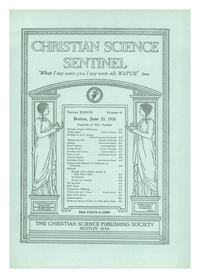