"Stand porter at the door of thought"

A Leak may be small, even insignificant in the beginning, but if it is not stopped it may become dangerous. This is the case with material leaks. Mental leaks must be guarded against with even greater alertness. Mary Baker Eddy, the wise Leader of the Christian Science movement, gave evidence of her understanding of this when she wrote (Science and Health with Key to the Scriptures, p. 392): "Stand porter at the door of thought. Admitting only such conclusions as you wish realized in bodily results, you will control yourself harmoniously," a statement which indicates that one's experiences for good or ill are the result of one's thinking.

A single wrong thought seeking to enter our consciousness, therefore, should not be disregarded. If such a thought should enter and not be expelled, it may attract to itself other wrong thoughts; and an erroneous thought, being an error, cannot lead to anything but more error. Who has not heard someone complain, Everything seems to go wrong today! Why? Possibly because that one allowed an erroneous thought to find a lodgment early in the day and took no steps to dismiss it. It may have been fear, or worry, or irritation. Irritation is a common error. If indulged, it lets in allied thoughts, such as unreasonableness, anger, faultfinding, discouragement, and even despair. And then instead of having to make only a trifling correction one is confronted with the need to make a big correction. 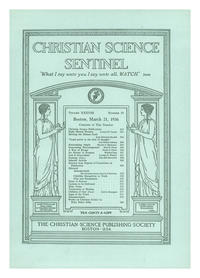