Christian Science came to me over twenty years ago, at...

Christian Science came to me over twenty years ago, at a time when all my material foundations were crumbling. I was filled with bitterness over my past and with fear for my future. I was a long way from friends, both of my parents had passed on, and I thought I had no one to turn to. A social adjustment faced me which I seemed unable to make. My thoughts turned to God and the Bible, and after months of reading and praying, I felt there was no hope there. I thought resentfully that if it were so important for us to know and understanding God, why did not the Bible make His teachings clear instead of clothing them in mystery. There were times when I was sure there was no God, others when I hoped there was none—so cruel and unsympathetic had been my concept of Him.

I was taken to a Christian Science practitioner by a friend, and after my first call I knew I had found what I had been looking for. She explained God to me as the loving, perfect, unerring Father-Mother. The Bible suddenly seemed flooded with light, and passages which previously had seemed obscure became perfectly understandable and comforting. In a short time the adjustment was made in a way I could never have foreseen or planned.

Send a comment to the editors
NEXT IN THIS ISSUE
Testimony of Healing
In gratitude for what Christian Science has done for me,... 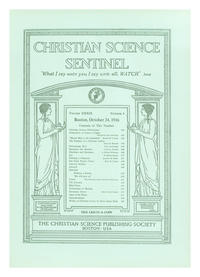