Kindly permit the correction of a mistaken implication...

B. Howard Grigsby, Committee on Publication for Ceylon,—Ceylon

Kindly permit the correction of a mistaken implication concerning the teachings of Christian Science appearing in an article on superstition and faith healing.

Christian Science must not be confused with mesmerism and thought transference. It is an exact, demonstrable Science, and its healings are brought about, not by blind belief or the action of one human mind over another, but by an understanding of the divine Principle which Christ Jesus taught and demonstrated. In her textbook, "Science and Health with Key to the Scriptures" (p. 487), Mary Baker Eddy, the Founder of the Christian Science church, says: "Mere belief is blindness without Principle from which to explain the reason of its hope." The ever-increasing number of well-authenticated instances of the healing of organic as well as functional diseases testifies to the power of Christian Science to heal now as in Jesus' time.

Send a comment to the editors
NEXT IN THIS ISSUE
Article
May I ask you to give space in your esteemed paper to... 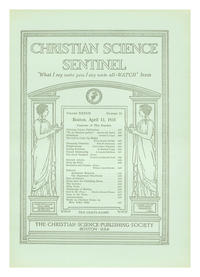