In an article appearing in your issue of January 18...

Frank K. Poe, Committee on Publication for the State of Maryland,

In an article appearing in your issue of January 18 under the heading "Chiropractic Health Talks" the following statement is made: "Chiropractic is distinct from every other method. It is not faith-cure, Christian Science, magnetism, electricity, osteopathy, hypnotism, or massage."

Send a comment to the editors
NEXT IN THIS ISSUE
Article
The Christian Science textbook, "Science and Health with Key to the Scriptures"... 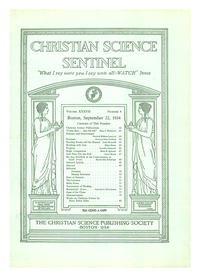