In October, 1922, I was suffering from the effects of a series of operations, preceded by a Caesarean operation. In addition I was in bondage to thick-lens glasses without which I could see nothing. I had worn them for five years, after hearing that they would always be necessary unless I wished to have an operation, the success of which was not assured.

I knew nothing of Christian Science beyond a deepseated antagonism to what I honestly believed it to be. The wife of the grocer near by mentioned Christian Science to me many times, until I began to feel irritated, and was none too polite. Had I not the word of several doctors? How could the simple reading of a book heal anyone? Having been trained as a nurse, I turned a deaf ear to these loving words, until one day she mentioned that she too had been a nurse. This aroused my curiosity. I was less resistant. Finally I agreed to borrow Science and Health at the library and to read it before discussing the subject any further.

Send a comment to the editors
NEXT IN THIS ISSUE
Testimony of Healing
For sixteen years I have been a student of Christian Science,... 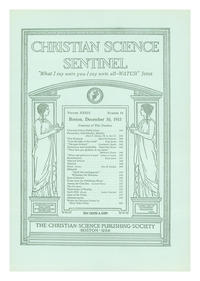