The essential difference between Christian Science and all other religions is that it concedes no reality to matter or material conditions, but relies entirely on spiritual reality as the basis of scientific demonstration or Christian healing. Spiritual reality never changes. It is human thought, confused by the basically false belief of life in matter, which needs to be regenerated, awakened to recognize and prove the supremacy of God, good. Mrs. Eddy's statement in "Unity of Good" (pp. 9, 10), "By knowing the unreality of disease, sin, and death, you demonstrate the allness of God," corresponds with the words of the Master, "Ye shall know the truth, and the truth shall make you free."

Jesus fed the hungry multitudes by the Sea of Galilee. When needing the tribute money, he directed one of his disciples to find it in the mouth of a fish. Near the close of his glorious career, he brought relief to those unsuccessful fishermen with the command, "Cast the net on the right side of the ship;" and "they cast therefore, and now they were not able to draw it for the multitude of fishes." One may ask, What was the consciousness which gave the Master dominion in these human experiences? Did he give credence to the testimony of the senses? Was he disturbed by the apparent lack of the tribute money or by any other appearance of insufficiency? No! Jesus dismissed the evidence of lack as readily and as completely as we today might dismiss any obviously false statement. More than that, he acted in accordance with his consciousness of the allness of God and brought forth the evidence of spiritual truth. He demonstrated the scientific fact of abundance, and proved the supremacy of spiritual law over material belief. 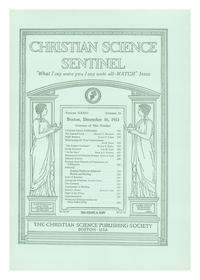