The annual Thanksgiving service held by Christian Science organizations throughout the world affords an opportunity, to those who have received the unspeakable benefits of Christian Science, of publicly acknowledging their gratitude for the good that they now realize. The Christian Science Journal shows how numerous are these organizations and how comprehensive is the grasp which the Church of Christ, Scientist, has obtained upon the thought of men and women of widely differing race and clime, for branch churches and societies are now to be found in many parts of the world. There is cause for great gratitude in this, because it betokens a bountiful God-given fruitage, a wondrous God-sent answer to prayer.

In the Manual of The Mother Church (p. 17) we read that in the year 1879 a few of Mrs. Eddy's students, acting on a motion by her, voted "to organize a church designed to commemorate the word and works of our Master, which should reinstate primitive Christianity and its lost element of healing;" and of this church, as reorganized in the year 1892, we read (ibid., p. 19), "The First Church of Christ, Scientist, in Boston, Mass., is designed to be built on the Rock, Christ; even the understanding and demonstration of divine Truth, Life, and Love, healing and saving the world from sin and death; thus to reflect in some degree the Church Universal and Triumphant." At our Thanksgiving services a pæan of praise ascends from the lips and hearts of men and women whose testimonies show that "primitive Christianity and its lost element of healing" have indeed been reinstated; prove that God has blessed abundantly the resolve of that "little band of earnest seekers after Truth" (ibid., p. 17).

Send a comment to the editors
NEXT IN THIS ISSUE
Article
Withhold Not Good! 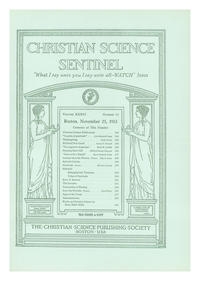