Having received so many benefits, morally and physically,...

Having received so many benefits, morally and physically, through the healing power of Christian Science, I should like to express my deep gratitude by testifying to some of these healings. When I first heard of Christian Science I had been suffering for ten months from an open wound left from an operation. During this time I had to visit the hospital to have the wound dressed and cauterized.

One day, feeling very unhappy, I called on a friend, who lovingly gave me God's message by handing me a Christian Science Sentinel. I continued with materia medica, however, until it was suggested that I should return to the hospital for another operation, which the doctor said might not cure me. This made me decide never to return to the hospital; and for a week I suffered untold agony, as eczema had spread around the wound. I finally decided to ask for treatment from a Christian Science practitioner. This was lovingly given, and it was a great revelation to me to see how quickly the eczema disappeared, and the proud flesh just dried up. The healing of the wound took some time, but this made me study very earnestly. During the treatment I was also healed of hemorrhoids; and bad temper and many other faults in my character were corrected.

Send a comment to the editors
NEXT IN THIS ISSUE
Testimony of Healing
For twenty years Christian Science has been the biggest... 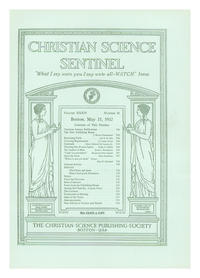