In the Queensland Times of October 8, a preacher is reported...

In the Queensland Times of October 8, a preacher is reported as having made reference to Christian Science in an address on "Evangelism" which is scarcely consistent with the ethics of Christianity. The preacher claimed that the devil is a strategist, and gave as his opinion that instead of making men sinners of the worst type through vice, he made it easy for them to sin by becoming followers of modern cults, naming Christian Science as one of them.

The preacher stressed the point that Christ Jesus commissioned his disciples, saying, "Go ye into all the world, and preach the gospel to every creature." This is exactly what Christian Science is doing. It makes practicable to-day the healing of "all manner of sickness and all manner of disease," and proves that "these signs shall follow them that believe."

Send a comment to the editors
NEXT IN THIS ISSUE
Article
Christian Scientists appreciate, and are in full accord... 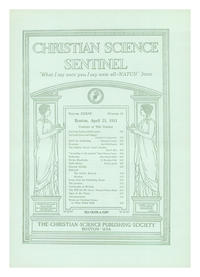