It is reported in the Daily Capital of July 17 that a...

John Murray Burriss, Committee on Publication for the State of Kansas,—Topeka

It is reported in the Daily Capital of July 17 that a Wichita physician, president of the Kansas Medical Society, who testified in a recent hearing before the State Board of Medical Registration and Examination, stated that much of the success of certain surgical operations "might be due to the power of suggestion, the same as Christian Science and all the rest of it." It may not have been the intention of this physician to misrepresent the method of Christian Science treatment, but his statement, nevertheless, expresses the belief that Christian Science practice is mental suggestion.

Will you kindly grant me space to say that suggestion, as well as mesmerism and hypnotism, rests upon the belief that one human so-called mind, through mental manipulation or the power of suggestion, can influence and control another human mind, and thus produce certain effects in the body. Such method of treatment, however, leaves the power of God, divine Mind, entirely out of consideration, and thereby distinctly separates such treatment from Christian Science practice, which utilizes only the power of divine Mind in the treatment of disease. Thus the Christian Scientist relies wholly on God in his healing work. 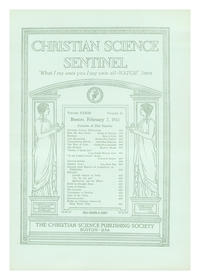