A Christian Scientist contemplating with gratitude The Mother Church edifice sees in it far more than an architectural triumph. To him it stands as the embodiment of the restoration of primitive Christian healing, which is the promise of humanity's complete salvation. The Church of Christ, Scientist, is spoken of in the Historical Sketch to be found in the Manual of The Mother Church (p. 17), as "designed to commemorate the word and works of our Master, which should reinstate primitive Christianity and its lost element of healing." Throughout her writings Mrs. Eddy iterates and reiterates this fundamental requirement of Christian Science a requirement which Jesus also constantly emphasized by precept and example during his ministry, and on the fulfillment of which the continued prosperity of the Church of Christ, Scientist, depends. By the touchstone of the successful healing of sickness and sin—yea, of death itself—does the world measure the practical value of Christian Science; and on no other basis can Christian Scientists prove that their religion is not just another sect, but that it is the reinstatement of that loving, vital Christianity of which Christ Jesus was the chief exponent.

It is accepted that every loyal student of Christian Science is yearning to demonstrate more forcibly by his healing work that he is indeed a disciple of Jesus and a follower of Mary Baker Eddy; and he knows that it is towards this same end that all the activities of The Mother Church are directed. While he is lovingly, joyfully, gratefully conscious that Christian Science is being ever more widely vindicated by just such proofs on the part of its adherents, and that its healing mission is reaching the uttermost parts of the earth, he is none the less acutely aware that much prayerful, consecrated effort is needed before he may be said to be conforming entirely to the standard set by the two great witnesses he is striving to emulate. 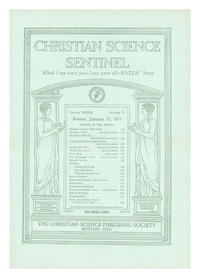