A correspondent writing from London in your issue of the...

A correspondent writing from London in your issue of the 22d inst. quite fails to see that the Christian Scientists throughout the world are not following the human personality of Mary Baker Eddy. In the year 1875 Mrs. Eddy gave to the world an interpretation of the Christian religion which has stirred Christendom to its depths. Her interpretation is contained in her book "Science and Health with Key to the Scriptures;" and having provided, as the name implies, a "key" to the Scriptures, this book is now read alongside the Bible in Christian Science churches throughout the world.

Mary Baker Eddy is the Leader of the Christian Science movement through her published writings, including the Manual of The Mother Church, The First Church of Christ, Scientist, in Boston, Massachusetts, a volume of Rules and By-Laws necessary "to maintain the dignity and defense of our Cause" (p. 3). She established the Christian Science periodicals, including The Christian Science Monitor, a daily international newspaper, and in writing the Church Manual, already mentioned, she provided for the future government of the entire organization. Every fundamental step in the establishment of the Christian Science organization was taken by Mary Baker Eddy. She enjoins her students in the following words: "Study the Bible and the textbook of our denomination; obey strictly the laws that be, and follow your Leader only so far as she follows Christ" (Message to The Mother Church for 1901, p. 34).

Send a comment to the editors
NEXT IN THIS ISSUE
Article
It is unfortunate that the Signal opened its columns to... 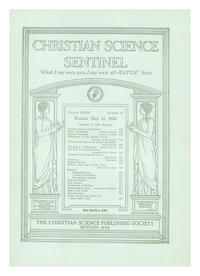