Concerning the Old Testament, Paul writes, "Whatsoever things were written aforetime were written for our learning, that we through patience and comfort of the scriptures might have hope." Many Christians of to-day can find recorded in the fifty-fifth psalm an experience tallying closely with their own. There, the Psalmist pours out his complaints and supplications, and expresses his hope and confidence in the attainment of ultimate peace. He was in deep trouble. Feeling from enemies, he was seeking a refuge. Let him speak: "My heart is sore pained within me: and the terrors of death are fallen upon me. Fearfulness and trembling are come upon me, and horror hath overwhelmed me." We can imagine him looking out from his hiding place and beholding a dove peacefully wending its way across the valley toward its nest and rest. Perhaps it spoke to him of peace and security, and he cried, "Oh that I had wings like a dove! for then would I fly away, and be at rest."

It may be that one has had a similar experience, or perhaps may be passing through it, if not from desertion of friends and pursuit of cruel enemies, yet from some other of the numerous phases of evil. Perhaps he is even now saying, Oh, if I could but move to some other place; if I could change to some other kind of work; or if I could be among different people! Well, a change of work or place or companions is in itself not wrong. Sometimes, a change may be in the line of wholesome progress. But a change which deserts the path of duty can never bring peace. Peace is a state of consciousness, not an asset of material conditions. Mary Baker Eddy, the Discoverer and Founder of Christian Science, writes in her textbook, "Science and Health with Key to the Scriptures" (p. 291), "Heaven is not a locality, but a divine state of Mind in which all the manifestations of Mind are harmonious and immortal, because sin is not there and man is found having no righteousness of his own, but in possession of 'the mind of the Lord,' as the Scripture says." Had David been able to flee from Judea with all the speed of a modern airplane, his seeming troubles would yet have been with him, for he would have fled from duty. 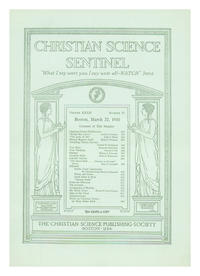