I did not take up the study of Christian Science for healing,...

I did not take up the study of Christian Science for healing, but because I wanted something better than I had ; yet among the first fruits I received while reading the textbook, "Science and Health with Key to the Scriptures" by Mary Baker Eddy, were two physical healings, one from all the phases of catarrh, from which I had suffered for fifteen years, and for which I had tried probably every known remedy, and also from various forms of throat trouble, to which I had been a victim ever since I could remember, and which were supposed to have been inherited. I am grateful to say that these healings are permanent. I was also healed of influenza with the help of a loving practitioner, in twelve hours, and never lost a moment from work. This was in 1918.

I should like also to express gratitude for the healing of my son of what an eye specialist called "partial blindness." We were told he would have to wear glasses always. With the loving help of a Christian Science practitioner our fears were stilled, and in less than a month he was permanently healed. This was eleven years ago, and he has never worn glasses.

Send a comment to the editors
NEXT IN THIS ISSUE
Testimony of Healing
Having experienced much help from the testimonies of... 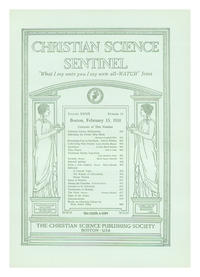