A number of years ago, previous to my becoming acquainted...

A number of years ago, previous to my becoming acquainted with Christian Science, I fractured my right arm when attempting to start a motor car. I was unable to resume my clerical duties until seven weeks later; and it was nine to twelve months before I could follow up the athletic pursuits to which I had been accustomed.

On Tuesday, November 8, 1927, I had a similar accident and again broke the right radius. Although I have been interested in Christian Science for some years I had not, up to that time, attained to the degree of understanding which would enable me to know that Science could heal a surgical case as easily as a medical one.

Send a comment to the editors
NEXT IN THIS ISSUE
Testimony of Healing
Christian Science came to me while I was a student in Chicago... 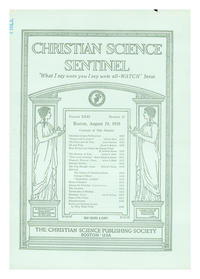