In reply to the letter in to-day's issue from an archdeacon...

In reply to the letter in to-day's issue from an archdeacon, I should like to say that I have the utmost sympathy with what I believe to be the archdeacon's kind, religious surveillance. I have no doubt that he sincerely believes Christian Science is wrong, and that it is his duty to say so. I trust, however, that having begun the study of Christian Science he will continue with it, for he may ultimately become a convert to its teachings. History furnishes reason for such hope, notably in the case of that great Christian hero, Paul, who at first persecuted Jesus' followers.

The archdeacon's remarks regarding the Christian Science textbook, "Science and Health with Key to the Scriptures" by Mary Baker Eddy, betray his failure to grasp the gist of the passages he cites. He states that Christian Science denies the resurrection of Jesus, but the Christian Science textbook says (pp. 292, 293), "In his resurrection and ascension, Jesus showed that a mortal man is not the real essence of manhood, and that this unreal material mortality disappears in presence of the reality." There is no such statement on page 479 as the one quoted by the archdeacon, but on pages 475 and 476 it is written: "Man is incapable of sin, sickness, and death. The real man cannot depart from holiness, nor can God, by whom man is evolved, engender the capacity or freedom to sin. A mortal sinner is not God's man. Mortals are the counterfeits of immortals."

Send a comment to the editors
NEXT IN THIS ISSUE
Article
Your issue of June 8 contained a letter from a clergyman... 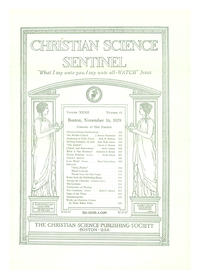