In the medical notes entitled "Health and Home," in...

In the medical notes entitled "Health and Home," in your recent issue, there was a statement about Christian Science which amounted to—not intentionally, of course—a misrepresentation of it. The statement referred to is, "Christian Science as it is called, and various forms of mental healing, would teach us that health is purely a matter of the mind." And in giving an illustration of the effects of mental treatment, the writer describes the process as one of mental suggestion. Thus power is given to the so-called human mind in its action upon the body, and such action is mainly exercised through suggestion, hypnotism, and belief! But the outstanding feature of Christian Science is its teaching that one can be healed and regenerated by the divine Mind only, through faith in, spiritual understanding of, and obedience to Truth. It is a religion founded upon the teachings and works of Christ Jesus. It is emphatically not a process of trying to make one's self believe what one wants to believe. The Christian Scientist can experience divine help and healing only in the degree in which he conforms to the divine will.

Send a comment to the editors
NEXT IN THIS ISSUE
Article
Please accept the following statement of fact pertaining... 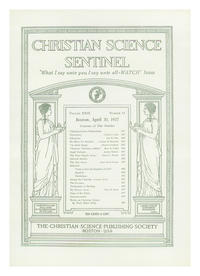