Recent issues of your paper announced a discussion by a...

Recent issues of your paper announced a discussion by a clergyman, at a public meeting, of the difference between Christian Science and divine healing. As the reverend gentleman is not an authority on the subject of Christian Science, which, during the last fifty years, has been the chief exponent of such healing, I feel sure that many of your readers will appreciate a few remarks from an authorized source, and in the spirit of fair play. There is a vast difference between Christian Science and what was presented as such in the discussion referred to. There is also a wide difference between Christian Science healing and the method of healing in use by the critic. Mrs. Eddy has briefly explained the difference in a short article entitled "Faith-Cure," in "Retrospection and Introspection" (pp. 54, 55). Slowly but surely the fact is becoming more generally known that Mary Baker Eddy, the Discoverer and Founder of Christian Science, was a great and wonderful woman, wonderful and great in a number of ways; but I am speaking now of that form of greatness which the world is the last to recognize and to be interested in, namely, spiritual qualities and spiritual attainments. Clara Barton, founder of the American Red Cross, whose own heartstrings were stirred, noted this greatness, recognized in Mrs. Eddy a kindred spirit, and paused to pay her this tribute: "She is the one person, regardless of sex, living to-day, who has done the greatest good for her fellow-creatures. Love permeates all the techings of this woman, so great, I believe, that at this perspective we can scarcely realize how great—and looking into her life-history we see nothing but self-sacrifice and unselfishness. Mrs. Eddy should have the respect, admiration, and love of the whole nation, for she is its greatest woman."

Suffering from an accident presumed to be fatal, Mrs. Eddy called for her Bible and, opening it, she found in Matthew those gracious words of Christ Jesus to the palsied man, "Son, ... thy sins be forgiven thee." A flood of light came and swept away all traces of her injury. Prior thereto Mrs. Eddy had sought to trace physical effects to mental causes. Now, more than ever, she sought the understanding of spiritual healing; and for three years she searched the Scriptures, and reached results more momentous than the world has yet begun to realize except in a dim and small way. Mrs. Eddy found the spirit of Truth, which Christ Jesus said would "guide you into all truth." Without this spirit Mrs. Eddy could not have made known one one-hundredth of the divinely original ideas found in her works. The Bible became a new book to her, disclosing an endless array of spiritual ideas from intelligence, intended intended for those prepared to receive them. Mrs. Eddy also found running through the sacred writings an inexorable law which may be stated in simple form thus: "Like produces like." Without an understanding of this law it is impossible to interpret the Scriptures scientifically and correctly. This law reveals that man made in God's image, "crowned ... with glory and honour," cannot sin, because he is born of God and because "his seed remaineth in him;" that he tabernacles with God, and is above sorrow, suffering, and death; that he never sins or suffers; that he is never sick and never dies; and that erroneous material sense from first to last creates its own misery and death. And thus Christian Science becomes an exact spiritual Science founded on the Bible and spiritual law, healing the sick and reforming the sinner through spiritual understanding, but not through blind, ignorant belief.

Send a comment to the editors
NEXT IN THIS ISSUE
Article
In a recent issue of your paper an article under the... 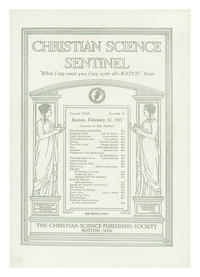