ONE of the grave errors which so-called mortal mind presents, as an excuse for its seeming existence and operation, is that God sends disease and trouble upon mankind, and that there is a consequent necessity for suffering under these great odds, which are represented as the "will of God." In reality, it is mortal mind, or "carnal mind" as Paul called it, which brings its own ills or evil effects through its attempts to counterfeit or reverse the perfect, spiritual, Godlike creation, referred to in the first chapter of Genesis. By turning, therefore, from the false claims of mortal mind to the realization that God, good, could not create or perpetuate anything unlike Himself, we recognize that man's being, emanating from the one Mind, or God, must be Godlike; and we come into the consciousness which knows nothing of sin, disease, or death.

The real man does not possess any characteristic or quality which needs correction, because he exists in a perfect state of being. It is the false sense of being, or belief in the reality of material sense and its idiosyncrasies, which must be destroyed. So, when an inharmonious condition seems to present itself, we can be sure we are entertaining in consciousness a false thought about man, which needs to be corrected. Mrs. Eddy states in "Science and Health with Key to the Scriptures" (p. 323), "Through the wholesome chastisements of Love, we are helped onward in the march towards righteousness, peace, and purity, which are the landmarks of Science." A dictionary speaks of chastening as being "wholly corrective and merciful in intent and result." If, then, through chastisement, or the destruction of mortal characteristics, we are awakened from the delusion of a selfhood apart from God, we should rejoice in the use of His rod, and be grateful that the staff of His loving support is always with us, the light of Truth always before us, ready to reveal the way out of error's night, when we are willing to work to relinquish the false image which mortal mind attempts to present. 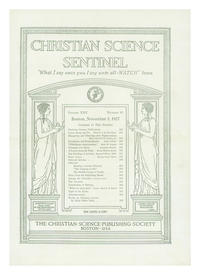