A recent issue of yours carries a sermon, and in this sermon...

William Brandt, Committee on Publication for the State of Maryland,

A recent issue of yours carries a sermon, and in this sermon its author attacks Mary Baker Eddy, Christian Scientist. This sort of sermon is not in accord with the Master's admonition that we should "love one another," and is, therefore, entirely at variance with the sermon of Christian Science. Not infrequently reports are received that persons have been healed of some physical or moral ailment after listening to or reading one of the Christian Science Lesson-Sermons. From this it would appear that God's Word still has power when properly used. Jesus said, "By their fruits ye shall know them;" and Christian Scientists are willing to be judged in this manner.

In reply to the statement, "No one can explain life," we wish to inform our brother that he is mistaken. Mrs. Eddy learned what life is sixty years ago, after she had been healed of a physical ailment pronounced incurable by her physician. In the Christian Science textbook, "Science and Health with Key to the Scriptures," Mary Baker Eddy defines "Life" as follows (pp. 468, 469): "Life is divine Principle, Mind, Soul, Spirit. Life is without beginning and without end. Eternity, not time, expresses the thought of Life, and time is no part of eternity. One ceases in proportion as the other is recognized. Time is finite; eternity is forever infinite. Life is neither in nor of matter. What is termed matter is unknown to Spirit, which includes in itself all substance and is Life eternal. Matter is a human concept. Life is divine Mind. Life is not limited. Death and finiteness are unknown to Life. If Life ever had a beginning, it would also have an ending." Through this explanation one is enabled to distinguish the difference between a material sense of life and real Life. Because he knew what Life is, the Master was able to raise his own body; he also raised Lazarus from the dead through this understanding.

Send a comment to the editors
NEXT IN THIS ISSUE
Article
A recent contributor to your columns avers that Christian Science... 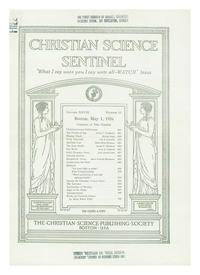