Trying to help another to read "Science and Health with Key to the Scriptures"...

Trying to help another to read "Science and Health with Key to the Scriptures" by Mary Baker Eddy gave me that for which I was yearning. We had fled from the East on the advice of a physician, who considered it beneficial for my husband to live in a dry climate. Ten years in Colorado showed that to be a mistake. The first reading of Science and Health helped me to overcome my fear enough to be willing to come to the Pacific Coast. As I continued to read Mrs. Eddy's writings and the other authorized Christian Science literature, to attend Christian Science church services, and in cases of acute troubles to have the help of a devoted Christian Science practitioner, my fear was healed. My husband was delivered from bondage at the same time; for the evidence (hemorrhages from the lungs) disappeared; and when he was examined by doctors here, as insurance companies require, they said there was not a trace of disease to be found about him.

Christian Science is indeed the Comforter promised by Christ Jesus; and through its loving teaching our mistakes have been shown us, thus making us doubly grateful for protection from other and perhaps greater ones. 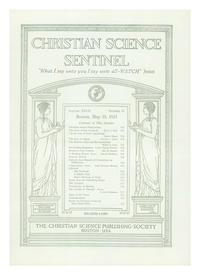