RIGHTEOUS prayer must necessarily be based upon a correct or scientific understanding of God. Thus, when James wrote that "the effectual fervent prayer of a righteous man availeth much," it was obviously his purpose to indicate that the efficacy of prayer depends upon spiritual right thinking, which, as we learn in Christian Science, involves, among other necessary constituents, sincerity, humility, the recognition of man's perfection as the image and likeness of God, and the rejection of the mortal belief that God's man is a material, finite, discordant personality called a mortal.

Outside of Christian Science, prayer is sometimes in the nature of an appeal to a personal finite sense of God to do something special for the petitioner; whereas prayer in Christian Science is more the grateful acknowledgment that God has done all things well and that, instead of sending or even permitting sin, disease, poverty, and death, He gives all His offspring dominion over them, on the basis that these errors are no part of the creation of Him to whom the beloved disciple referred as Love. 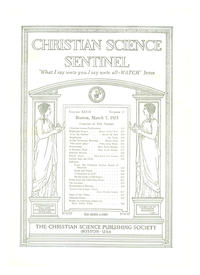