The second chapter of Acts speaks of the apostles as "all with one accord in one place," and tells of the spiritual baptism or descent of the Holy Ghost upon them and the wonderful message which it enabled them to give out,—a message which "every man heard them speak in his own language." So perfect was the demonstration that all the mocking, scoffing attempts of error to belittle or deny its wonderful evidence were of no avail; animal magnetism could claim no power where there was unity in God, divine Mind.

If all men would unite in obeying the First Commandment, evil, as false belief, would cease to exist. Why? Because evil can have no claim to power or entity other than that given it by humanity's belief in it or fear of it. Humanity, however, does not seem willing, as yet, to give up its material beliefs. For this reason it cannot solve the whole problem in a day. Yet there are many ways in which we can grow toward the perfection and harmony so desirable—"here a little, and there a little;" and it is especially important that all who call themselves Christian Scientists, particularly church members, should follow where Truth leads toward this end. Have not Christian Scientists enlisted in a warfare against evil? And where could a better opportunity be found to prove to a waiting and watching world the glory and joy of unity than in church work? 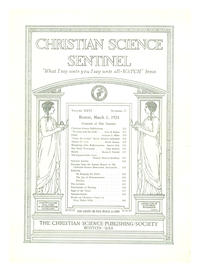