He who has received the benediction of healing in Christian Science, and the spiritual regeneration which follows this demonstration of divine power, sooner or later yearns to share with others that which has been so freely bestowed upon himself. When this period of development comes, that student is wise who heeds this sacred desire and turns diligently and unreservedly to the teachings of the Bible and the inspired writings of our Leader, in order that he may learn the Christ-way of healing the sick as well as the sinning ones of earth. If the student is progressive, he soon learns that a ready obedience to the Master's admonition, "Freely ye have received, freely give," is a necessary sequence to the reception of the gift of divine healing, if he does not wish the wells of his own salvation to run dry. Who, then, that has felt the sacred touch of this healing truth wishes to stand longer in the valley of indecision on a question so vital to one's self as well as to humanity?

When the student is ready to leave the valley and begin his climb to the spiritual altitude where work in the vineyard of Christian healing becomes not only a duty he owes to humanity, but also the greatest possible joy, then he is ready to profit by the assurance which follows the utilization of this infallible rule in Christian Science. "God will heal the sick through man, whenever man is governed by God," Mrs. Eddy writes in "Science and Health with Key to the Scriptures" (p. 495). Through the prayer of consecrated longing to be ever governed by God, the Christian of to-day is privileged to ascend to the upper room of clarified thought and there make ready for the coming of the Christ, who to-day, as of yore, is ever pleading with mortals, inviting them to come up higher and partake of the feast of unselfed love that is already prepared and waiting for all. 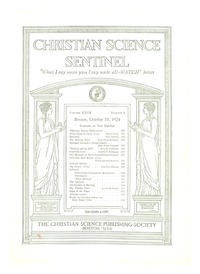