THE great majority of mankind is busily engaged in the endeavor to get something. To get is the prime motive of mortals. The reason, as Christian Science makes plain, is that so-called mortal mind, the one basic error from which emanate all manifestations of evil, employs as its agency of identification, motivation, and expression that blending of negative beliefs termed human personality,—the counterfeit of the real man, the individual expression of Deity. This mortal, human personality, having no Principle or power to support or guide it, naturally strives to support itself by getting all that it can for itself, and in whatever ways its selfish ingenuity, impelled by fear of its own inevitable self-destruction, may conjure and conceive. The result is a temporal world of carnal thought, wherein men strive to get from men, and merciless competition, fratricidal and parasitic habits of thinking and acting, are common-place.

How busy men are about getting! Many would get dollars and believe they are getting rich; others would get place or renown; some would get lands, houses, automobiles, fine apparel. Many are busy getting sick, getting well, getting hurt, getting angry, getting into trouble or getting out of it. Even as men ride in the streets and highways some are getting, getting ahead or getting behind. All would get satisfaction and happiness. Getting, getting—how hollow the word sounds! Such getting is not in the language of the new tongue of Spirit, and has never been heard by God. Though the material sense picture of a world all a-getting, of mortal men impelled by false motives and futile ambitions, is not a pleasant thing, it is well for us to perceive its deceitful, empty vanity, and make certain that we are not accepting a place in the picture. It is but the poor counterfeit of real being, wherein God and man forever live to give. 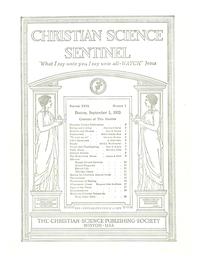