Most of us, if asked, "What is a giant?" would answer: "A creature of extraordinary proportions." Perhaps some one might be reminded of Goliath; another, of Bunyan's Giant Despair. However, it is safe to assume that in our day men usually think of a giant as an entertaining fiction of the fairy-story writer; and they might be inclined to doubt, if told that Blunderbore and his brethren are personifications of the distortion of proportion which takes place in human thought when confronted by a difficulty. To the housewife, the pile of unwashed dishes; to the business man, a desk cluttered with correspondence; to the college student, the thesis, research, and required each term,—all may become giants in thought, if "it can't be done" is allowed to come between the doer and the deed. Once undertaken, the task often surprises us by quickly assuming more normal proportions, and soon is mastered. The human thought has to know that "it can be done" So, in the application of the healing truth taught in Christian Science, we must watch that one phase of error does not seem to us to be larger and more difficult to handle than another.

From season to season, and from one generation to the next, the beliefs of disease which frighten mankind change. The specific diseases which claimed to terrify in the Middle Ages are gone. In their place others try to stalk up and down, as did Goliath of old, defying any one to overcome them, and terrifying poor humanity into believing that their height is indeed "six cubits and a span." There are beliefs, such as incurability, deformity, and chronic conditions, which seem to have become fixed giants in human thought. They would appear just as large and unconquerable to Christian Scientists as to their fellow-men, but for the work of Mary Baker Eddy, the Discoverer and Founder of Christian Science. So one who is trying to put Christian Science into practice must be ever on guard that he be not mesmerized into the "it can't be done" state of thought. He must banish the lie, or the liar that whispers, "Thou art not able to go against this Philistine to fight with him." 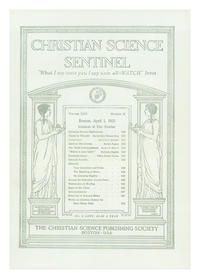