Over the opening words of the ninetieth psalm, there is a little heading in italics, "A Prayer of Moses the man of God," which often escapes the attention. While many of the Psalms were written by David, some of them were not; and one of these is the ninetieth. Moses was the first one, so far as the Scriptures tell us, who not only grasped but recorded the great spiritual truth that wherever men seem to live, whether in a mortal body, a material world, or elsewhere, spiritual man really lives and has his being in God. So he opened his stately psalm with those wonderfully comforting and truly inspired words: "Lord, thou hast been our dwelling place in all generations."

How or where did Moses learn this great spiritual fact as to man's real home or dwelling place, so far above any merely human sense of abode or habitation? In the nineteenth chapter of Exodus we read, "And Moses went up unto God,"—that is, rose in thought to a lofty height of spiritual understanding. This might have taken place as he sat quietly in his tent communing with Spirit, as he walked up the hillside, or plunged deep into the recesses of the forest or the mountains, that he might get away for a time from the strife and tumult of the people and be alone with God. In any case, it was probably during an exalted spiritual experience when the revelation came to him that, whatever the testimony of the material senses, spiritual man has never lived in matter, but always and only in Spirit. No doubt it was a realization of this vital truth, and the practical application of it in his own life, that enabled the great leader of the Hebrew people to overcome so largely the belief in old age; for the record tells us that at the age of a hundred and twenty years "his eye was not dim, nor his natural force abated." We all have, at times, and in some degree, these moments or periods of spiritual exaltation, when the false, material sense of things fades from view, and we rise in consciousness till we catch a glimpse, at least, of the very glory of God, and in a measure grasp the great spiritual facts of being. 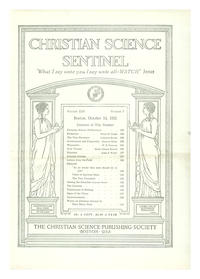