It is probable that more casuistry has been poured out...

It is probable that more casuistry has been poured out over the question of the forgiveness of sin than on any other subject of a similar nature. The reason is that the human mind, just because it is human, forms the most erratic and unscientific conceptions of what forgiveness means. The omission to inflict a penalty for sin, for instance, is not necessarily forgiveness at all. The unctuous announcement that a sin has been overlooked, whilst the memory of it is harbored, or whilst the details of it are being industriously and surreptitiously circulated, is a mean kind of sin in itself. It is obvious that true forgiveness wipes the slate clear, and that anything short of this is a mere travesty of one of the grandest words in the English language. When Pope wrote the famous, and now, unfortunately, hackneyed line, which declares that forgiveness is divine, he stated a deep metaphysical fact, probably without much consideration of what was entailed in it. Forgiveness is divine because unless Principle forgives there is no such thing as forgiveness. Yet, contradictorily enough to the human sense, infinite Principle cannot know anything of sin, unless sin is to be regarded as Principle, which is absurd.

That was the question which faced Spinoza, and he answered it in just such a way. And so Mrs. Eddy, who was far too logical to fall into such a trap, and who had proved by Jesus' own test, the metaphysical healing of disease, that she understood the truth as he taught it, repudiated fundamentally the orthodox view of sin and of forgiveness, and proceeded to show that sin being a lie about divine activity could only be forgiven when the lie was proved to be a lie, and so wiped out. If, that were to say, sin was real, sin would be indestructible, and so eternal. The only power, then, that could forgive sin is the fact of the existence of infinite Principle, God. Consequently, therefore, the only way to obtain forgiveness of sin is to stop sinning. In proportion as this is done a man frees himself from the suggestion of mortal mind, and so ceases to identify himself with the sinner, the mortal mind. This is the real man or Christ, appearing through the evaporating nothingness of the mists of the senses, and thus alone is forgiveness attained.

Send a comment to the editors
NEXT IN THIS ISSUE
Article
A clergyman as reported in the Post says, "Christian Scientists... 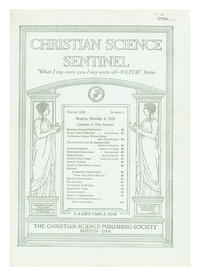