Being grateful for the many blessings received from the understanding of the Bible, as explained in "Science and Health with Key to the Scriptures" by Mrs. Eddy, and knowing too the great good which has been brought to mankind through the testimonies to the power of Truth to save and to heal, as given both in our Wednesday evening services and through our periodicals, I should like to add my mite to the latter. Paul says, "I have planted, Apollos watered; but God gave the increase." The truth of this declaration was proven to me in connection with the following testimony, which has been given at one of our Wednesday evening meetings.

Our youngest son had been skating on a street where we supposed there was but little traffic, but it seemed that in avoiding one wagon his foot caught in the wheel of another one, and he was dragged until the driver discovered what was taking place and stopped the horse. He picked up the boy and brought him home, but was very much frightened at his appearance, as the child's clothes were torn and his body bruised, and he was in a semiconscious condition. When the truth was declared for him, as we are taught in Christian Science, he was restored to his normal condition, and we afterward found that we had failed to note the bruises on his head, but they had caused no harm. 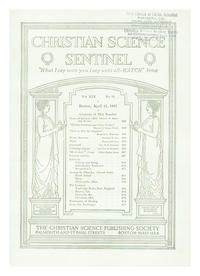