A writer seems to think that Christian Science teaches that...

A writer seems to think that Christian Science teaches that hell is done away with, that the devil is a myth, that punishment for sin is all a fake, that we deny there is any wickedness in the world, and assert that God is too good to punish sin, that all may now "eat, drink, and be merry," and that fear no longer annoys.

The teaching of Christian Science in regard to the devil is in accord with what Jesus taught: "He was a murderer from the beginning, and abode not in the truth, because there is no truth in him. When he speaketh a lie, he speaketh of his own: for he is a liar, and the father of it." Did you ever stop to think what a lie is when uncovered and destroyed? On page 588 of the Christian Science text-book, "Science and Health with Key to the Scriptures" by Mrs. Eddy, the word hell is defined as follows: "Mortal belief; error; lust; remorse; hatred; revenge; sin; sickness; death; suffering and self-destruction; self-imposed agony; effects of sin; that which 'worketh abomination or maketh a lie.' "

Send a comment to the editors
NEXT IN THIS ISSUE
Article
No one familiar with his teachings can truthfully deny... 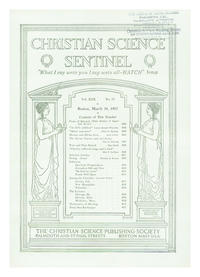