CAMBRIDGE, MASS .—First Church of Christ, Scientist, has increased its distribution of all the Christian Science periodicals during the year just closed. It has been interesting to note not only the welcome acceptance of our literature, but the sincere appreciation of it as evidenced by the loving letters received. The total amount sent out during the year, including subscriptions, has been 4511 Sentinels, 491 Journals, 258 Herolds, 19,596 Monitors, 8 pamphlets, 295 copies of Senator Works' speech, and 1675 local newspapers containing lectures on Christian Science. Grateful acknowledgment is hereby given of sincere appreciation for the gift by the Trustees under the Will of Mary Baker Eddy for distribution work shared in by the branch churches. 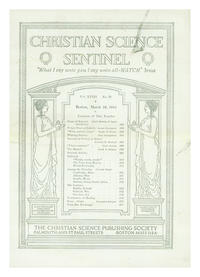