On several occaions I have seen in print the statement made by critics of Christian Science that its rapid growth has been the result of a well-directed publicity plan of propaganda. Christian Scientists know that this is true in a large measure, but the critics seem to stop at this point instead of going farther and learning the occasions of this publicity.

Suppose a man had a well the water of which would heal every disease in the world; that the water could not be pumped out faster than it flowed in, and that the owner knew it was impossible to exhaust the supply. Would not the average man, owning such a well, want to share his good fortune with sick humanity? While the supply of water in such a well might be large, it would be infinitesimal when compared to the supply of spiritual truth, the truth about God and His creation which heals and saves. If one could imagine mankind demonstrating the basic law of mathematics so often as to exhaust the supply, then he might imagine the supply of truth as subject to exhaustion. If one could imagine any place where the principle of mathematics is impossible of demonstration, then he might imagine a place where Christian Science would be unavailing. 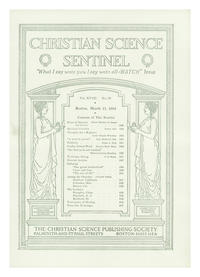