At the Anglican church congress at Brisbane Dr. Radford...

At the Anglican church congress at Brisbane Dr. Radford once more tilted with the windmill of his misconception of Christian Science. The reverend critic is, of course, entitled to his opinion, and to express it in speech, sermon, or journalistic review, but in his representation of a subject to which he is antagonistic it is desirable that assertions regarding it should be accurate.

Send a comment to the editors
NEXT IN THIS ISSUE
Article
I have read in a recent issue the report of a meeting in your... 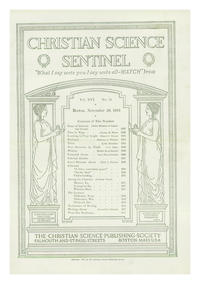