We commend the courage that characterized Senator...

We commend the courage that characterized Senator Works' defense of Christian Science on the floor of the Senate in opposition to the Owen bill proposing the creation of a federal department of public health. In doing so, we have nothing to say either for or against the teachings of the late Mrs. Eddy; but our admiration is aroused by an avowal obviously so frank and honest, and so bravely flung in the face of certain criticism.

Aside from any question of belief in Christian Science, the fight taken up by the junior senator from California was one in which the common people of the country have a deep concern. Senator Owen may not intend to create a medical trust for the advancement of one particular school, but Judge Works said that such would surely be the operation of the measure he has introduced. At any rate the Oklahoman has offered as a law the regulations for which the American Medical Association has been lobbying for years and which, if Judge Works was right, would work the rankest injustice to thousands of practitioners, not of allopathic or homeopathic training, but competent just the same to treat suffering humanity. We are all quite familiar with the persistent efforts of the association. We have read its magazine articles and followed its activity at each session of Congress. We even had the satisfaction of seeing defeated the attempt made before the recent Legislature by California physicians of the old school to advance their own interests through several bills, the worst of which was that fathered by Dr. Butler, an assemblyman from Los Angeles.

Send a comment to the editors
NEXT IN THIS ISSUE
Article
The sermon printed in your issue of the 28th ultimo... 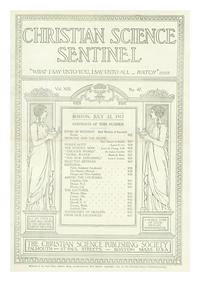