Having been born a Jew, and having reached Christian Science through the disappointments of atheism, the question, "Does the acceptance of Christian Science compel a Jew to deny his nationality?" has been presented to me in various ways by persons having knowledge of these facts. Before replying to this question, it is well to come to an understanding as to the meaning of the term Jew. Nationally, the Jew is defined as an individual belonging to the Jewish race, which had at one time an independent government in Asia Minor. Religiously, a Jew is defined as an individual who subscribes to the Mosaic Decalogue and the laws and customs which grew therefrom.

Failing to recognize this distinction, the governments of many countries have compelled the Jew to change his name and in some cases to join the Christian church in order to break up the national spirit. But recently a change has occurred, and Christian missionaries, when proselyting, have recognized this line of demarcation between the Jewish nationality and the Jewish religion, and have avoided any attempt to denationalize the Jew, thus implying that nationality has no bearing on the acceptance of Christianity. Their converts are called Jewish Christians. Thus, in spite of the old adage, "Once a Jew always a Jew," and the dictum of the Christian world that when a Jew accepts Christianity it is improper for him to retain his nationality, the terms Jewish Christian and Jewish Christian Scientist can only help to attract the Jewish nation to the Christian teachings set forth in Mrs. Eddy's writings. 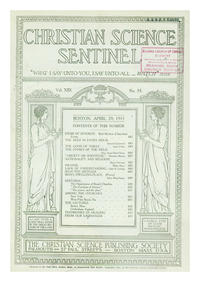